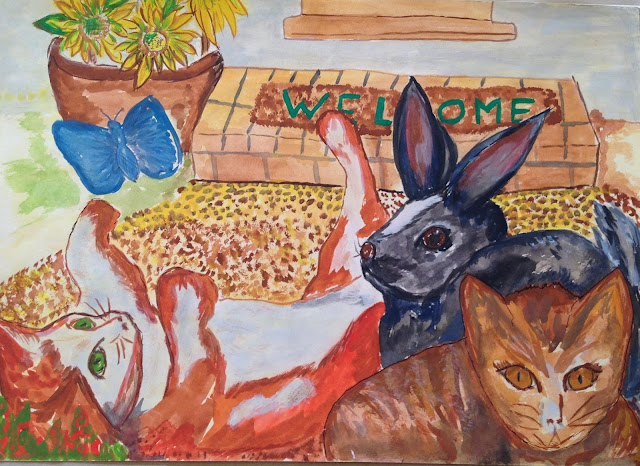 Welcome To another edition of
Fauna Park Tales
With
Friends: An African Adventure
(Fauna Park Tales Book 2)
Available in eBook & Paperback Formats
eBook/Paperback
About The Book 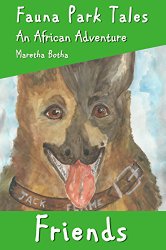 "Friends: An African Adventure" is the second book of the series called "Fauna Park Tales" based on "African Adventures of Flame, Family, Furry and Feathered Friends", a GOLD MEDAL WINNER on Authonomy, supported by HarperCollins.

The following is an excerpt from the HarperCollins Children's Editor Review:
"A vivid and engaging world of animal characters . . . the use of cleverly animalised verbs is very creative – Dolly Cat's 'whispurr'. The exploration of interrelationships between animals is a very successful topic in the children's literature genre, and you have created some great personalities – the stubborn goat 'Plump-Grump' and the conceited 'His Handsomeness, King Rat' being some of my favourites . . ."

Life takes strange turns for Flame, a puppy born in the African desert. Adopted by a free-range cattle farmer, the pup faces the challenge of proving himself to more than one of his new family.

As Flame grows into a strong and brave dog, he finds friendship with many loyal furry and feathered friends who teach him to keep The Promise – protecting the helpless ones in Fauna Park, a secret sanctuary within the boundaries of the farm. This ordinary desert dog becomes a hero when, to keep his promise, he saves a zebra foal from a fire.

These stories are perfect to be read before bedtime to younger children. Preteens will enjoy escaping into an imaginary world where many bush creatures always have hope that everything ends well when the sun goes down.
Excerpt from Chapter 3: “Fighting Fires”On a certain morning, I woke earlier than usual and felt uneasy. The pleasant, crisp air slipped over my feathers, but I couldn’t relax. From afar, the slight breeze carried the barking and yapping sounds of Piper’s dogs. A slight shimmer in the sky forced my good eye to look towards the north-west. Shivers ran down my feathers, because the grassland was on fire! Flames licked at the grass and shrub along the boundary walls. To make matters worse, a westerly breeze chased larger flames towards the baobabs, fanning smaller fires burning at their roots.

I whistled shrilly and heard Rocksy the rabbit’s special danger thump-thump-thumping signals – for the first time in months – bumping against the doggy trapdoor.

Cook Katie was making coffee in the kitchen and shouted at him, but he seemed disobedient and continued making an awful noise. Flame also began barking and scratching at the kitchen door. The whole porch came alive with all sorts of extra sounds: cats meowing and RatX’s exercise wheel whirring. Smaller birds that always perched on the porch also flew back and forth, trying to escape.

By the time Cook Katie opened the kitchen door, the glow from the fires had lit up the porch. It looked as if someone had forgotten to switch off the lights.

She had no time to scold the animals and just screamed, ‘Fire! The grass around the giant baobabs is burning, licking around their trunks. Come quickly. Flames near the windmill are moving towards us. Oh, no! The outer fences are also aflame.’

Bigger fires were at least as high as a tall man. Not only were the dry grass and shrub burning, but smaller trees also caught alight. It was a scary sight. The baobabs’ leafless winter branches looked as if they were already giving way to the frightening fires. Birds were flying to and fro among their black shadows in the brightly lit sky.

Everyone thought the baobabs were doomed unless the way of the fires could be changed. Chestnut, with John James in the saddle, galloped straight to the windmill and loosened its brake completely. The family, Cook Katie and Clement grabbed anything that could hold water and ran to the water troughs. They filled their buckets and emptied them in front of smaller fires.

I used to think there were few humans in the valley, but suddenly they came running from all over to help, bringing more buckets and spades. So, clearing fire breaks became easier. A few men cut away grass and shrub near the outbuildings, using sickles. Others ran back and forth, carrying large pails of water and putting out grass fires.

Samuel, an elderly villager, and Clement were pounding smaller fires around the baobabs with wet, hessian sacks. As they smothered the flames, large columns of smoke began to whirl amongst the baobabs. Goats and donkeys ran everywhere, bleating and braying in fright.

The stables were safe, but the horses continued to kick wildly against their stable doors. Dust, smoke and the stench of burning trees filled the morning air. My tree was safe, but I felt sad when I saw what was happening down below. With nostrils flaring, the cattle bellowed wildly.

It also seemed as if Flame had forgotten about his fear of fires, because he herded the cattle to safety, behaving like a real sheepdog. Thinking about all the possibilities, I was amazed – a sheepdog after all? Then, he stopped suddenly, listening to something. His left ear was standing up just as if Cook Katie had starched it like one of her linen serviettes.

What else could he possibly have heard amidst all the commotion? I thought, but then I also heard far-off sad cries.

Not worrying about himself, Flame dashed through the burned-out stubble in a westerly direction. He touched the ground just here and there as he ran towards the Llokodi Hills. It was as if his Kalughari[1] heritage gave him speed to run faster, and courage not to look back or feel the heat under his paws.

The hills were burning brightly and huge flames were everywhere. Even the early morning sun was hidden by thick black smoke, making breathing difficult. Flame came closer to the spot from where the sounds had come and saw a chilling sight. A young female zebra and her two newborn foals were trapped! When the rest of their herd had moved to safety, she had lingered too long while waiting for the foals to become stronger. Fires on one side and a small cliff on the other prevented her from escaping. The flames were about to surround them.

Flame had no time to bark instructions to the zebras, so he scrambled up the side of the rock cliff. With a great leap, he landed next to the zebras. Unfortunately, the mother was so spooked that she kicked him in the ribs. He fell to the ground, winded. Fear gave her wings and she jumped up and over the flames. Flame got up, grabbed one of the foals by the back of its neck and dragged him to safety. The mother nudged and licked the little one at once and he stood up.

Despite the pain in his side, Flame crawled back into the danger zone. Dense smoke was everywhere. He coughed and battled to breathe. Still, he tried to drag the second one out of the fire’s reach, but he fell down. It looked as if he and the foal were doomed. Flame heard a loud kleeou-kleeou somewhere in the sky, but he couldn’t see a lone martial eagle flying above them. The clouds of smoke were too thick.

This martial eagle kept circling lower, just staying out of the fire’s reach, chanting on and on, ‘Kleeou-kleeou! Remue-toi! (Get a move on!) Flame, don’t pass out. I’ll get help for you.’


He circled over them a few times. When he saw that neither was reacting, he continued flying towards the giant baobabs. He had to find someone to help Flame and the newborn zebra.

Just before the martial eagle reached the baobabs, a flash of lightning lit up the skies and heavy sounds of thunder followed. The long-awaited rains came; starting slowly at first. Large, heavy drops pounded the parched, burnt ground; which sizzled as little pillars of charred dust chased up-up towards the clouds, giving the place an eerie look.

Meanwhile, Flame and the zebra foal lay next to one another, not moving once. Soon large water puddles drenched them. They were in great danger. On several occasions in the past, during heavy downpours, the streams feeding Molapo Lake had become strong torrents, flooding the winding dirt road and both bridges, preventing anybody from getting in or out of the valley.

Moments after the storm broke, the fires started to die down. The rain made such a noise that no one listened to the calls of the martial eagle in the sky or the zebra mother and her foal trotting by. Everyone who saw the bird thought that he had most likely lost his way during the storm, but he continued circling and whistling.

Far from the farmhouse things looked bad for the two trapped animals. Poor Flame. Neither he nor the young zebra foal heard the martial eagle’s anxious calls any longer. It seemed as if they had been left to die among the embers.

[1] Kalughari = a fictitious name for a semi-desert in this story.