Who's Your Favorite Fallen Angel? 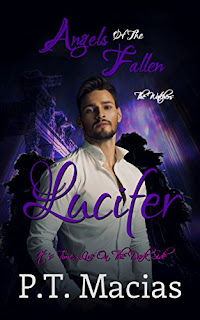 books2read.com/Lucifer
Two For Tuesday Teaser!
Excerpt #1
The fiery pit of hell erupts, shooting scorching crimson flames up through the different stations of hell.
Sofiel stops halfway down the ramp to glare at Lucifer. She squares her shoulders and tosses her long dark hair over her shoulders. Her glowing light gray eyes narrow and she lifts her chin up squaring her shoulders.
“I’m here to do my job! I’m not here to see you! I’m glad that you’re still here paying for your insolence!”
Lucifer laughs out loud at Sofiel.
“You’re a complete fool! Yeah, I paid for my imprudence.”
“I’m not the fool Lucifer! You think very highly of yourself! That’s the problem with you! That’s what gets you in trouble, isn't? I’m not here for you!”
Lucifer stands tall with his right hand on his silver sword. His bicep flexes as he moves, and he stands straight with his feet spread wide. He grips the silver sword, beautifully embellished with precious jewels that glow as he moves. The silver bracers, embossed with an intricate pattern, emphasis his muscular forearms.
Lucifer is a handsome man with dark black hair. His beard is trimmed to enhance his square jawline. His nose is straight, and he has sexy, full, sensual red lips. His beautiful bright blue eyes glow with his inner power, shining brightly.
The expensive black slacks fit him perfectly snug accentuating his wide shirtless shoulders. The hot flames cast a soft glow on his golden skin. The soft black curls cover his chest, tapering down to disappear below his pants. He looks sexy, dangerous, and beautiful.
Lucifer narrows his bright blue eyes and raises his eyebrow.
"I suggest that you stop looking for me, Sofiel." 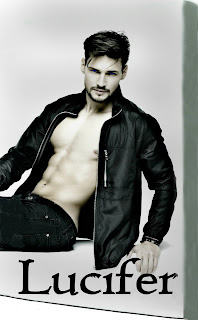 Excerpt #2
“What the fuck are you doing here?”
Lucifer deep thunderous voice booms out as he walks down the ramp. The fiery fire pit flares shooting fire balls up the stations of hell.
Sofiel stops, moves back against the black limestone wall watching the fireballs. She then turns to look over at Luc raising trembling hands to push back her long dark black hair. She tucks some locks behind her ears. She then moves away from the wall and walks over to Lucifer.
“Angel Lucifer, I’m here to see how you’re doing. I was worried about you.”
Lucifer gazes down at her and shakes his head crossing his arms.
“Angel Sofiel, this place is not for the likes of you. You need to return to the heavens before your tainted! You need to return before someone notices that you’re gone. The time in the heavens and earth are different. The time on earth passes swiftly.”
Sofiel takes a step closer and grasps her hands tight to stop from trembling. Her huge light gray eyes glow and the silver specks flash brightly. She slowly smiles up at him tilting her head to the right.
“Angel Lucifer, I’m lost without you in the lecture hall. Gabriel doesn’t have time to teach me. I. . . .I . . miss. . . . .you.”
Luc shakes his head, glares at her, and looks away. He clenches his jaw, the muscle twitches from the intense pressure that he’s inflicting, and narrows his eyes to look at the fiery pit.
“Angel Sofiel, return to your station. Stop calling me Angel Lucifer! I’m not an Angel!”
Lucifer turns to look at her, his brilliant blue eyes glow, and his silver specks flash with the beat of his racing heart. 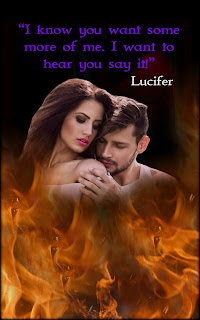 Get Your Copy of Book Four of
The Watchers' Series.
Angels Of The Fallen: Lucifer
books2read.com/Lucifer 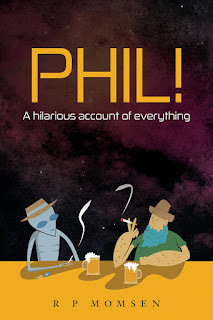 By: RP Momsen
A very funny science fiction adventure that will change the way you look at life, the universe and why we're all here. Billions of years ago, our universe was born. Not really that terribly exciting for most life forms except of course yourselves… and, well, Phil. The poor bastard who’s had to watch over all you people the last billion or so years. Well, finally after years of listening to all your griping, bitching and whining, always with some imaginary being getting all the credit, he’s finally had it! Phil has decided to explain what the world is, why you’re here and how you can evolve finally into a species worth talking about at parties. In this hilarious actual account, Phil takes two unwitting Physicists on the adventure of their lives, which isn’t saying much for a couple of physicists, and shows them what life, the universe and lovely little corner pubs really is all about. They’re transported to other dimensions to meet their better looking selves, get taken prisoner by an evil but very good looking race, fly through black holes and help the creation of a new planet all while their greatest challenge hangs in the balance, saving earth from the most evil, and best dressed, species the universe has ever seen. Will they save earth? Has all the years of hard work Phil has done creating you beings be lost? Does any of this really matter?

“You gonna answer that?” Delphinia slurred. Typically an attractive female colleague, except now she had half a glass of Pan Universal Kumquat Juice down her front, and somehow an equal amount sprayed randomly throughout her hair. We were all drunk—she was winning.

“Just another idiotic human with some whiny ‘I can’t do anything for myself’ question.” “Are they still making you do that? Didn’t you create some god chat line for them to look up on their own?” asked Braithwaight, a much larger and uglier version of myself who had the unusual characteristic of having the largest nostrils in the universe. You wouldn't know them as nostrils, of course, given that their size and look is of one of your outhouses, massively uneven, bright orange and dripping with something I'd rather not discuss.

“Slow... what dey say?” Delphinia slurred, spitting Pan Universal Kumquat Juice over both of us, which as it turned out was actually rather tasty; I decided to order one next despite it being a bit of a girly drink.

“Dear Lord.” (Dear Phil, it should have actually read.) Please give me strength in dealing with my two kids; I’m always so tired, they stay awake for hours on end, I seem to be the only one in the house able to nap, they eat all my food, hide my weed and are even messier than my 3 ex husbands. I can’t keep doing it. What should I do?”

“Signed ‘lame-ass, stoned and grumpy Mom.’ I added the last part.” I ordered my drink despite Braithwaighte’s sudden drunken episode of visualizing me in a short skirt with nice big perky ears; an odd and very unsexy effect of the alcohol.

“So, how do you answer it?” Braithwaight asked, refocusing himself.

“ I usually give some form of positive bullshit advice that they ignore, and then they continue doing exactly what they’ve been doing for years,” I replied.

“You should just sway what you twink then; who cares what they do?” Delphinia again slurred, though this time with more drooling than spitting, which was fine with me since I now had my own drink. Oddly enough, this had never occurred to me before, which just goes to show that the advice of a really drunk person should not be discounted even when slurred, spat, or dribbled. I took two large gulps of my drink, hoping to gain some more of this wisdom; my entire mind seemed to open up and swallow everything around me; my eyes fell out of my head, dropped off the table, and rolled under my now very short skirt, and then I spat the remaining mouthful onto my two companions, to which Braithwaight said ‘mmmm’ before promptly ordering one for himself.

If it had seemed like a good idea before, after two sips of Pan Universal Kumquat Juice, it became the most brilliant idea since the first crossing of the universe in a giant Easter egg with very slightly modified snowshoes and a six-pack of Grantham Planetary Beers. Without putting anymore thought into it, or in fact having any more thought left, I promptly replied to my lame ass Mom message “I would suggest refraining from drinking every night until near unconsciousness, or adoption, whichever ones easier. Signed, Phil.

PS. There is no Lord—Surprise!” 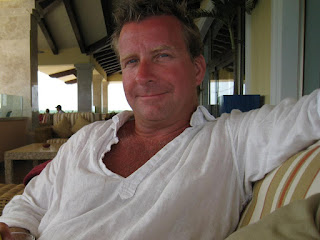 R.P. Momsen was lucky enough to meet Phil in a very lovely but rather smelly pub a few years ago. After listening to the most amazing story of his life, and a half dozen pints, Rick agreed to bring Phil’s story to the world and finally get Phil a vacation. Through an arduous process over the next couple years of intense notes, grand philosophical debates, lengthy trips through multiple universes and numerous beers this masterpiece of answers was named Phil and finally released. A great friendship has been created and Rick has agreed to continue to write the real truth about everything, why it’s kind of a good thing to know and what humankind could do to be invited to the really cool parties.